It’s Non-fiction November and every day we’ll be bringing you a fascinating fact to think about and discuss.

Teeth are made of four things: pulp, dentine, enamel and cementum. Pulp is in the middle, full of nerves and blood vessels. Dentine is hard and yellowish and surrounds the pulp. Enamel is the hardest thing in your body and it protects your teeth. Cementum covers the roots of your teeth, under your gums, and jeeps your teeth in place.

It’s impossible to know for sure, but two sports seem to have been around longer than the rest – running and wrestling. There are cave paintings of people doing both sports in Lascaux, France created between 15,000 and 17,000 years ago. Other early sports include archery, swimming and an early kind of sumo wrestling.

#15 What animal makes the best daddy?

Seahorses are the best dads! They are the only animal, that we know of, where the dads look after the babies in their own tummy. Seahorses pair up and will often stay with that mate for their whole lives. The dad seahorse gets eggs from the mum seahorse and puts them inside a pouch in his tummy to keep safe. The eggs hatch, and little seahorses wriggle around inside him and grow bigger. Then, when they’re ready to come out, the dad will squeeze his pouch, and out will pop hundreds of tiny baby seahorses!

#14 What animal makes the best mummy?

There are lots of great mums in the animal kingdom! Orangutan mums are perhaps the most hard-working (apart from human mums!). They carry their babies constantly for the first few months and then continue to care for them for seven years! Elephant mums take turns looking after the baby elephants in their group. Alligator mums carry their newly hatched babies around inside their jaws, to keep them safe until they can learn to defend themselves. Octopus mums can lay up to 200,000 eggs, which they protect for a very long time, sometimes as long as four years, until the eggs hatch. Sometimes, they eat their own tentacles rather than leave their babies unprotected!

#13 Do cows really cause global warming?

Cows aren’t the only source of global warming, but their farts and burps don’t help! A single cow can fart and burp around 100 to 200 kilograms of methane a year, which is a big problem for global warming. Methane is a greenhouse gas that heats up our planet. Feeding cows garlic could be one way to reduce the amount of gas they make, but it is humans keeping lots of cows to turn into meat that’s the problem! Lots of cows need lots of space, so trees are being cut down to make space for cows on the land.

One way to help is to eat less meat or no red meat, so less land is needed to keep the cows, resulting in fewer farts and burps heating up the planet.

Every human has bacteria in their gut, which help the body to break down and digest food. As part of the digestion process, gut bacteria sometimes make gas, and this has to come out of our bodies – either as a burp or a fart. Sometimes farts come from air we’ve swallowed while eating too quickly. Some farts come out silently, but others make a loud noise when the muscles in your bottom vibrate as the gas comes shooting out!

It’s thought that every minute, one rubbish truck of plastic is dumped into our oceans. If this continues to increase, by 2050 the plastic in the oceans could weigh more than the fish living there!

A huge amount of plastic that doesn’t get recycled ends up in the sea. Big pieces of plastic break down to become microplastics, which is like a plastic soup. These pieces never disappear completely and can’t be scooped out of the water. There are massive patches of plastic in oceans around the world, including the Great Pacific Garbage Patch in the northern Pacific Ocean, which is three times the size of France.

Plastic is poisonous and animals can’t digest it. Plastic can make up 74% of the diet of sea turtles in the Great Pacific Garbage Patch. It also spreads diseases that destroy coral reefs, which are home to 25% of all marine life.

We know that plastic is very hard to get rid of, so we must stop using it when we can and find ways to reuse it when it’s the only option. Try not to buy plastic things, recycle and reuse the plastic things you have and, if you visit the beach, collect any rubbish you see and recycle that too. 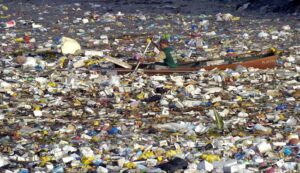 Our eyes make three kinds of tears: tears to clean our eyes, tears to keep our eyes watery and emotional tears, which happen when we’re sad, stressed, in pain or sometimes when we’re really happy. Tears contain a natural painkiller with a fancy name, leucine enkephalin, so you sometimes feel better after a good cry! When you feel sad, your nervous system picks up on your emotions. Then, part of your brain makes a little molecule that tells your eyes to make tears.

Laser beams are made out of tiny amounts of light called photons, and they have no temperature at all! But they do cause things they hit to heat up a lot. In 2012, scientists zapped a piece of metal with the world’s most powerful laser, and the piece of aluminium heated up to 2,000,000°C! For a moment, it was the hottest temperature on Earth.

#8 What comes after a million, billion and trillion?

The name of the popular search engine ‘Google’ came from a misspelling of the word ‘googol’, which is a very large number (the number one followed by one hundred zeros to be exact). 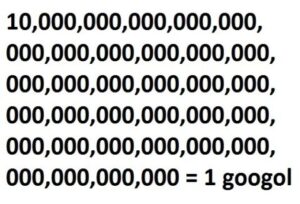 A ‘googolplex’ is the number 1 followed by a googol zeros, a number so ridiculously big that it can’t be written because there literally isn’t enough room in the entire universe to fit it in!

You might have heard the word ‘infinity’ before or seen its symbol that looks like the number 8 placed on its side. Infinity means a limitless quantity or something that goes on forever. While it’s not really a number like 1, 2 or 3, infinity is often used in math as part of equations and formulas.

#7 Who was the first computer programmer?

A woman named Ada Lovelace, born in 1815, is known as the first computer programmer, even though she lived way before computers were invented. Ada’s father was a poet called Lord Byron. A few weeks after Ada was born, Lord Byron commanded Ava’s mother, Lady Byron, to leave with Ada. Lady Byron decided her daughter would never study poetry in case she turned out like her father, and made sure that Ada learned maths and science instead.

When Ada was a teenager, she met a man called . Babbage had an idea for a mechanical computer called the analytical engine, although he never managed to build one. Ada wrote about this machine, and her notes included the first ever instructions for a machine to work things out itself – that is, the first-ever computer programme!

Ada imagined that computers would one day play chess and music, and do all kinds of things. She was right! 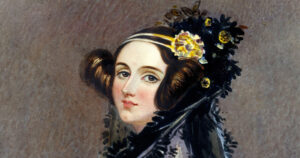 #6 How many people are there in the world?

We’re not actually sure why people gave the numbers the names they did, but we do know a little bit more about the way people write numbers and where that came from. Each language has different names for numbers, but the digits 1, 2, 3 and so on originated in India. It is called the Hindu-Arabic numeral system because it was brought to Europe by Middle Eastern mathematicians. The way people write these digits today might also be connected to the idea of drawing dots in ancient Mayan culture. The Mayans would represent numbers by drawing dots and lines. This is similar to how you might write numbers today. For example, if you put two dots down and join them with a little loop and a tail, you get number 2. If you draw three dots down in a vertical line and join them up with two loops, you’ll get a figure 3, and you can represent number 4 by joining four dots.

#4 How do fireworks get up in the sky?

Fireworks were invented in China around 2000 years ago. Chinese people created a kind of gunpowder and poured it into a stick of bamboo, then threw it on a fire so it would explode! They used potassium nitrate, which is still used today, and this is what shoots fireworks into the sky. Fireworks today have a fuse that has to be lit to make the gunpowder shoot the firework upward into the sky. Once in the air, the gunpowder causes it to go “bang”!

#3 What is the deadliest shark and why?

The great white shark has a reputation for being the most deadly, but there are sharks that have probably killed more people. You definitely wouldn’t want to get in the water with a tiger shark or a bull shark. Tiger sharks are called the dustbin of the sea because they eat almost anything. Bull sharks are smaller, but they can be scarier because they come very close to the shore and swim up rivers. We are much more dangerous to sharks than they are to us. Sadly, millions of sharks are killed every year by humans.

Hair is made of something called keratin. When hair first grows from under your skin, in a little thing called a follicle, it is alive, but once it grows out of the follicle it is dead. That’s why it doesn’t hurt when you get a haircut. The hair on your head can last for seven years. We lose around 50 to 100 strands every day, but they’re replaced with new hair, so we don’t really notice!

#1 Why do trees lose their leaves?

Did you know there are over three trillion trees in the world??!  Not all of them lose their leaves, but the ones that do are called deciduous. Trees need food and water to give them energy to grow. During the summer, tree leaves do an amazing job of turning sunlight into food for the tree in a process called photosynthesis. However, in autumn and winter there is less sunlight, which makes it harder for photosynthesis to happen. Rather than wasting lots of energy keeping all their beautiful leaves, trees let the leaves go and have a long winter snooze to save energy!

Come back tomorrow for another fascinating fact …