This week we have been taking part in ‘Maths Week’, celebrating all things maths! Across the week we have enjoyed a variety of activities…

On Monday, as part of our class assembly we listened to a book called ‘PLANET RESCUE’ by Patrick George. The book was ready by Dr Sammie Buzzard, who told us that she uses maths in her job as a climate scientist. As we listened to the story which outlined different ways we can help to make the world a greener place, we thought about links between these ideas and maths.  Surprisingly, there were lots…from discovering the distance cycled to counting how much litter is collected or how many times lights have been turned off to conserve electricity! 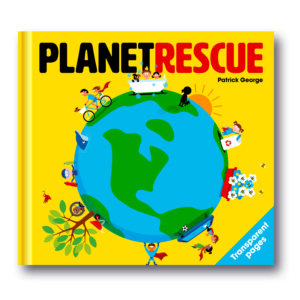 On Tuesday, we participated in a workshop called ‘Cuthbert Sees Double’, based on the story by Sally Lunt (who led the session). We listened to the story of Cuthbert the Croc as he learnt how to double numbers and were then given the chance to practise this skill. To do this we played a game using dice, doubling the number that had been rolled. 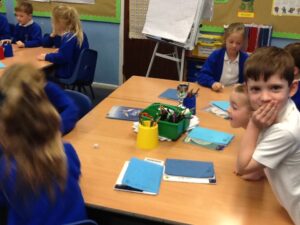 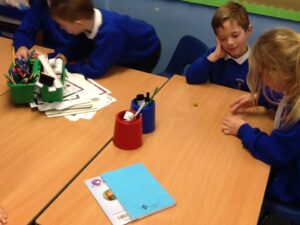 During our workshop, we were also introduced to an art activity involving doubling. The next day, we tried this out for ourselves! We painted dots/shapes onto one side of a piece of paper, folded this in half, pressed down and just like that the dots/shapes had doubled! 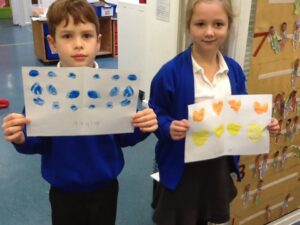 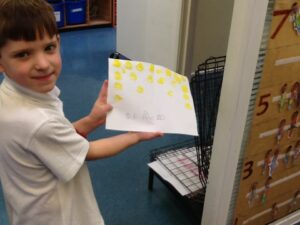 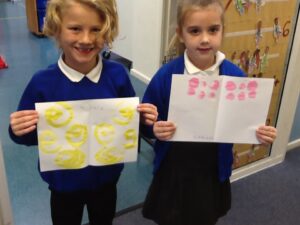 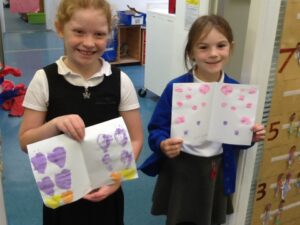 Also on Wednesday, we applied our learning about addition and subtraction to play ‘Milo’s Money Game’. Milo was tasked with visiting the shops to buy some specific items. It was our task to work out the total cost and what the change would be, before deciding whether Milo was going to spend or save this. Later, we enjoyed playing a game involving coin recognition – matching the correct coin picture and value together.

On Thursday we played a game called NIM 7.  It was really exciting working out the strategy needed to win!  Perhaps you could play again at home…

Finally, on Friday we did ‘Noah’s Investigation’:  Noah saw 12 legs going past him into the ark.  How many creatures could he have seen?  We discovered that he could have seen 2, 3, 4, 5 or even 6 creatures.  We worked reciprocally with our learning buddies using counters to explore different combinations of animals.  We were very enthusiastic about fining different solutions and discovering there were lots of different combinations.

Have a look through our photos at all the wonderful maths week challenges we enjoyed this week.