Yesterday was National Winnie the Pooh Day. I didn’t notice until today but it’s never too late to celebrate the wisdom and warmth of this wonderful character. Originally published nearly a hundred years ago, there is still so much to learn from the Bear of Little Brain. Whether you read one of the original stories or watch the classic Disney film, you’re sure to fall in love all over again with A.A. Milne’s loveable characters and there’s so much that is relevant to us at Southill. Pooh is a wise and thoughtful bear who always chooses to be positive. You could say he’s a 2%er! 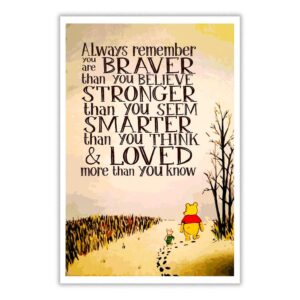 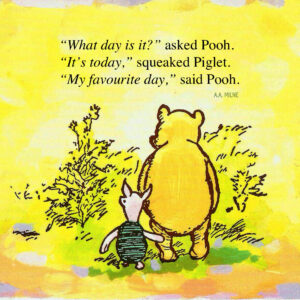 My favourite story has always been the one where Pooh invents a new game and Eeyore joins in. Here we join them on the bridge…

Rabbit leant over further than ever, looking for his, and Roo wriggled up and down, calling out ‘Come on, stick! Stick, stick, stick!’ and Piglet got very excited because his was the only one which has been seen, and that meant that he was winning.
‘It’s coming!’ said Pooh.
‘Are you sure it’s mine?’ squeaked Piglet excitedly.
‘Yes because it’s grey. A big grey one. Here it comes! A very – big-grey-Oh, no, it isn’t, it’s Eeyore!’

And out floated Eeyore.
‘Eeyore!’ cried everybody. Looking very calm, very dignified, with his legs in the air, came Eeyore from beneath the bridge.
It’s Eeyore!’ cried Roo, terribly excited.
‘Is that so?’ said Eeyore, getting caught up by a little eddy, and turning round three times. ‘I wondered.’
‘I didn’t know you were playing,’ said Roo.
‘I’m not,’ said Eeyore.
‘Eeyore, what are you doing there?’ said Rabbit.

‘I’ll give you three guesses, Rabbit. Digging holes in the ground? Wrong. Leaping from branch to branch of a young oak-tree? Wrong. Waiting for somebody to help me out of the river? Right. Give Rabbit time, and he’ll always get the right answer.’
‘But, Eeyore,’ said Pooh in distress, ‘what can we – I mean, how shall we- do you think if we– ‘
‘Yes,’ said Eeyore. ‘One of those would be just the thing. Thank you, Pooh.’
‘He’s going round and round,’ said Roo, much impressed.
‘And why not?’ said Eeyore coldly.
‘I can swim too,’ said Roo proudly.
‘Not round and round,’ said Eeyore. ‘It’s much more difficult. I didn’t want to come swimming at all to-day,’ he went on, revolving slowly. ‘But if, when in, I decide to practise a slight circular movement from right to left – or perhaps I should say,’ he added, as he got into another eddy, ‘from left to right, just as it happens to occur to me, it’s nobody’s business but my own.’
There was a moment’s silence while everybody thought.

‘I’ve got a sort of idea,’ said Pooh at last, ‘but I don’t suppose it’s a very good one.’
‘I don’t suppose it is either,’ said Eeyore.
‘Go on, Pooh,’ said Rabbit. ‘Let’s have it.’
‘Well, if we all threw stones and things into the river on one side of Eeyore, the stones would make waves, and he waves would wash him to the other side.’
‘That’s a very good idea,’ said Rabbit, and Pooh looked happy again.
‘Very,’ said Eeyore. ‘When I want to be washed, Pooh, I’ll let you know.’
‘Supposing we hit him by mistake?’ said Piglet anxiously.
‘Or supposing you missed him by mistake,’ said Eeyore. ‘Think of all the possibilities, Piglet, before you settle down to enjoy yourselves.’

But Pooh had got the biggest stone he could carry, and was leaning over the bridge, holding it on his paws.
‘I’m not throwing it, I’m dropping it, Eeyore,’ he explained. ‘And then I can’t hit you. Could you stop turning for a moment, because it muddles me rather?’
‘No,’ said Eeyore. ‘I like turning round.’
Rabbit began to feel that us was time he took command.
‘Now, Pooh,’ he said, ‘when I say “Now!” You can drop it. Eeyore, when I say “Now!” Pooh will drop his stone.’
‘Thank you very much, Rabbit, but I expect I shall know.’
‘Are you ready, Pooh? Piglet, give Pooh a little more room. Get back a bit there, Roo. Are you ready?’
‘No,’ said Eeyore.
‘Now!’ said Rabbit.
Pooh dropped his stone. There was a loud splash, and Eeyore disappeared…

It was an anxious moment for the watchers on the bridge. They looked and looked… and even the sight of Piglet’s stick coming out a little in front of Rabbit’s didn’t cheer them up as much as you would have expected. And then, just as pooh was beginning to think that he must have chosen the wrong stone or the wrong river or the wrong day for his Idea. something grey showed for a moment by the river bank…
and it got slowly bigger and bigger… and at last it was Eeyore coming out…
With a shout they rushed off the bridge, and pushed and pulled at him; and soon he was standing among them again on dry land.
“Oh, Eeyore, you are wet!” said Piglet, feeling him.
Eeyore shook himself, and asked somebody to explain to Piglet what happened when you had been inside a river for a quite long time.
“Well done, Pooh,” said Rabbit kindly. “That was a very good idea of ours.”
“What was?” asked Eeyore.
“Hooshing you to the bank like that.”
“Hooshing me?” said Eeyore in surprise. “Hooshing me? You didn’t think I was hooshed, did you? I dived. Pooh dropped a large stone on me, and so as not to be struck heavily on the chest, I dived and swam to the bank.”
“You didn’t really,” whispered Piglet to Pooh, so as to comfort him.
“I didn’t think I did,” said Pooh anxiously.
“It’s just Eeyore,” said Piglet. “I thought your Idea was a very good Idea.”
Pooh began to feel a little more comfortable, because when you are a Bear of Very Little Brain, and you Think of Things, you find sometimes that a Thing which seemed very Thingish inside you is quite different when it gets out into the open and has other people looking at it. And, anyhow, Eeyore was in the river, and now he wasn’t, so he hadn’t done any harm. 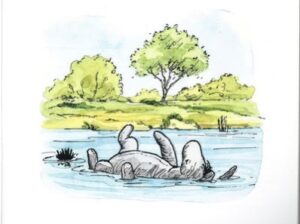